Bread Financial Holdings, Inc.
(Name of Registrant as Specified In Its Charter)
NOT APPLICABLE
(Name of Person(s) Filing Proxy Statement, if other than the Registrant)

SECOND SUPPLEMENT TO PROXY STATEMENT
FOR THE ANNUAL MEETING OF STOCKHOLDERS
TO BE HELD ON MAY 24, 2022
The following information is a supplement (this “Second Supplement”) to the Definitive Proxy Statement on Schedule 14A (the “Proxy Statement”), filed by Bread Financial Holdings, Inc. (the “Company,” “we” or “us”), together with the Company’s Notice of Internet Availability of its proxy materials, with the Securities and Exchange Commission (the “SEC”) on April 13, 2022, as supplemented by the First Supplement filed with the SEC on May 17, 2022 (the “First Supplement”), in connection with the solicitation of proxies by the Board of Directors (the “Board”) for use at the Annual Meeting of Stockholders of the Company to be held on Tuesday, May 24, 2022, at 9:00 a.m. Central Daylight Time (the “Annual Meeting”).
This Second Supplement is being filed with the SEC and is being made available to stockholders on or about May 20, 2022.
THIS SECOND SUPPLEMENT SHOULD BE READ IN CONJUNCTION WITH THE PROXY STATEMENT AND THE FIRST SUPPLEMENT.
Response to ISS Recommendation on Say-on-Pay Advisory Vote
On May 12, 2022, Institutional Shareholder Services (“ISS”) issued its initial report (the “ISS Initial Report”) regarding the proposals to be considered at the Annual Meeting, which included a recommendation that its clients vote “Against” Proposal 2, our advisory vote on compensation paid to our named executive officers (“NEOs”). This recommendation was in contrast to that of Glass Lewis and Co., another major proxy advisory firm, which recommended a vote “For” Proposal 2.
In the Initial ISS Report, ISS recommended a vote “Against” Proposal 2 for the following stated reasons: (i) pay-for-performance misalignment from a quantitative perspective, (ii) lack of disclosure surrounding certain annual and long-term incentive goals, (iii) concerns regarding the one-time transitional “gap” equity awards made to NEOs in 2021, and (iv) severance payments made to our former Chief Financial Officer.
On May 17, 2022, the Company filed the First Supplement with the SEC, in which the Company responded to the concerns raised in the ISS Initial Report. A copy of the First Supplement can be found on our website at: investor.breadfinancial.com/financials/sec-filings/.
On May 19, 2022, ISS issued an updated report (the “ISS Updated Report”) in response to the First Supplement. In the ISS Updated Report, ISS reduced its overall quantitative concern over the Company’s pay-for-performance compensation structure from a High level to a Low level. In addition, ISS recognized the Company’s responsiveness to ISS’ request for additional disclosure regarding performance goals under the Company’s annual and long-term incentive programs, which addressed a concern raised in ISS’ original analysis.
Notwithstanding the foregoing, ISS re-asserted its recommendation “Against” Proposal 2, noting that a concern still remained with respect to severance/transition-related payments made to the Company’s former Chief Financial Officer.
In response to this concern, the Company is providing the following clarifying information regarding the severance compensation paid to its former Chief Financial Officer in connection with his departure from the Company on April 13, 2021. The Company believes that such additional information further supports the appropriateness of this one-time severance arrangement and should be helpful to the Company’s investors in their assessment of the Company’s 2021 pay outcomes.
Our former Chief Financial Officer departed at the request of the Company to allow for new leadership at the Chief Financial Officer position as part of a transitional period during which the Company’s new Chief Executive Officer was building a new leadership team. The payments received by our former Chief Financial Officer were paid pursuant to the terms of a negotiated Executive General Release and Enhanced Severance (the “Severance Agreement”) entered into by our former Chief Financial Officer and the Company.  In return for the consideration paid to him, our former Chief Financial Officer, among other things, (i) gave a general release of claims, (ii) agreed to covenants regarding confidentiality and non-disparagement, and (iii) reaffirmed and renewed certain other restrictive covenants in place during the course of his employment, including non-solicitation (customers and associates) for a period of one year post-termination and non-competition for a period of two years post-termination. The Company believes the terms of the Severance Agreement, including severance pay, were both reasonable and customary under the circumstances.
We thank you for your consideration and continued support, and reiterate our request that you vote “For” Proposal 2 regarding Say-on-Pay. Even if voting instructions for your proxy have already been given, you may revoke your prior vote at any time before or during the Annual Meeting in accordance with the procedures set forth at page 106 of the Proxy Statement and vote in favor of Proposal 2.
*****
This Second Supplement is filed with the SEC and made available to our stockholders solely for the purpose of addressing the ISS concern with respect to Proposal 2. No changes were otherwise made to Proposal 2 or any other proposals contemplated by the Proxy Statement.
Alliance Data Systems (NYSE:ADS)
Historical Stock Chart
From Dec 2022 to Jan 2023 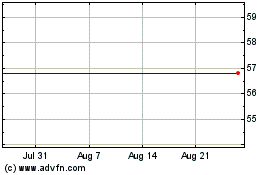 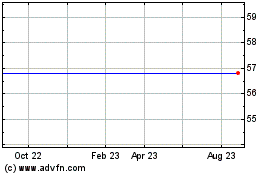 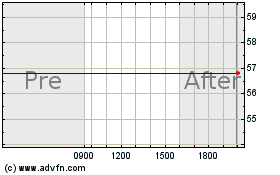