On April 13, 2021, Ms. Stacy B. McLaughlin notified the Company of her resignation from her position as Vice President and Chief Financial Officer of Willdan Group, Inc. (the “Company”) and from all other positions she holds with the Company and each of its subsidiaries, effective April 16, 2021.

In connection with Ms. McLaughlin’s resignation, on April 13, 2021, the Board appointed Mr. Creighton (Kim) Early as Vice President and Chief Financial Officer of the Company, with such appointment to be effective on April 16, 2021. Mr. Early, age 68, currently serves as Executive Vice President of Willdan Energy Solutions and as Chief Financial Officer of various subsidiaries of the Company, positions he has held since December 2015. Mr. Early has also served as a member of the Board of Directors of H.W. Lochner, Inc., a private company, since April 2016, and has served as the Chairman of its Audit Committee since February 2021. Prior to joining the Company, Mr. Early served as Chief Financial Officer of both public and privately held companies, including three years with Infrastructure & Energy Alternatives LLC, a renewable energy construction company. He also previously spent 14 years at Earth Tech, Inc., a multinational infrastructure company, including serving as its Chief Financial Officer and as the President of its Global Water Management Division. Mr. Early holds a B.S. in Business Administration from Ohio State University and an M.B.A. from the University of Michigan. Mr. Early will serve as the Company’s principal financial officer and principal accounting officer for Securities and Exchange Commission (the “SEC”) reporting purposes.

There are no arrangements or understandings between Mr. Early and any other person pursuant to which Mr. Early was appointed as Vice President and Chief Financial Officer and there are no family relationships between Mr. Early and any director or other executive officer of the Company, and he has no direct or indirect material interest in any transaction required to be disclosed pursuant to Item 404(a) of Regulation S-K.

On April 16, 2021, the Company issued a press release announcing Ms. McLaughlin’s resignation and Mr. Early’s appointment as discussed in Item 5.02 herein. A copy of the press release is attached as Exhibit 99.1 hereto and is hereby incorporated by reference in its entirety. The information in this Item 7.01 and the attached Exhibit 99.1 to this Current Report on Form 8-K is being furnished (not filed) pursuant to Item 7.01 of Form 8-K. 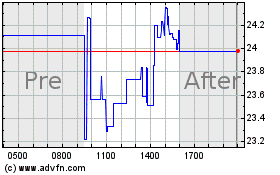