78.26
-1.65 (-2.06%)
Upgrade to Real-Time
Afterhours
78.26
Notice of Exempt Solicitation. Definitive Material. (px14a6g)
May 09 2019 - 10:23AM
Edgar (US Regulatory)
Name of Registrant: Safety Insurance Group, Inc.
Name of persons relying on exemption: California Public Employees Retirement System (CalPERS)
Address of persons relying on exemption: 400 Q Street, Sacramento, CA  95811
Written materials are submitted pursuant to Rule 14a-6(g)(1) promulgated under the Securities Exchange Act of 1934. Submission is not required of this filer under the terms of the Rule, but is made voluntarily in the interest of public disclosure and consideration of these important issues.

May 8, 2019
Dear Safety Insurance Group, Inc. Shareowner:
Support Shareowner Proposal #4 Requesting Majority Vote
We urge shareowners to support proposal #4 at the company’s May 22, 2019 Annual General Meeting. As of record date April 1, 2019, CalPERS owned approximately 10,000 shares of Safety Insurance Group, Inc. common stock. As a long-term shareowner of the company we ask that you support our non-binding shareowner proposal requesting the Board of Directors amend the company’s governing documents to allow for a majority voting standard in director elections, while retaining a plurality vote standard for contested director elections.
Majority Vote for Director Elections is Becoming Widely Accepted
Plurality voting is rapidly being replaced with majority voting in uncontested director elections as a growing number of large companies have adopted it as a corporate governance best practice. Approximately 92% of the companies in the S&P 500 and 47% of the companies in the Russell 3000 have adopted some form of majority voting – an indication of the current direction of good corporate governance.
A Plurality Vote Standard Disenfranchises Shareowners
CalPERS believes that a plurality voting standard effectively disenfranchises shareowners when directors run unopposed. Under the existing plurality standard, uncontested director nominees can be elected with a single “For" vote, leaving votes “Withheld” with no legal effect whatsoever. While under the CalPERS majority vote request, director nominees would need to be elected by the affirmative vote of a majority of shares represented and voting at a duly held meeting. Majority voting would give shareholders a meaningful voice in determining who will represent them on the board.
Support Proposal #4 requesting Majority Vote for Director Elections
We believe a majority vote standard is essential to a sustainable system of governance that fosters director accountability and long-term value creation. Fully accountable governance structures through the adoption of majority vote should be in place to offer shareowners a meaningful voice in the director election process.  Please vote “FOR” shareowner proposal #4.
Should you have any questions please feel free to contact Todd Mattley, CalPERS Associate Investment Manager at Engagements@calpers.ca.gov   or 916-795-0565.
Thank you for your support.
Sincerely,

Simiso Nzima
Investment Director, Global Equity
CalPERS Investment Office
PLEASE NOTE: The cost of this solicitation is being borne entirely by CalPERS and is being done through the use of the mail and telephone communication. CalPERS is not asking for your proxy card.  Please do not send us your proxy card.
Safety Insurance (NASDAQ:SAFT)
Historical Stock Chart
From Jul 2020 to Aug 2020 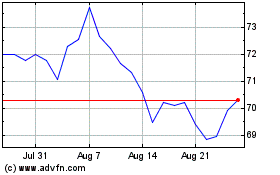 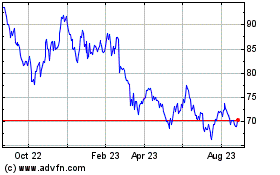 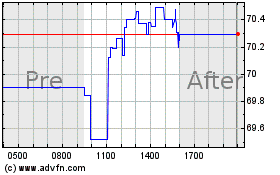