19.85
-3.20 (-13.88%)
Upgrade to Real-Time
Afterhours (Closed)
19.85
Don’t Go Bargain Hunting on Plug Power Stock Quite Yet, Says Analyst
April 13 2021 - 09:22AM
TipRanks
Shares of hydrogen fuel cell company Plug Power (PLUG), which have lost more than half their value over just the past three months, suffered their latest blow on Monday when Morgan Stanley analyst Stephen Byrd resumed covering the stock at a reduced level of recommendation -- Equal Weight, equivalent to a Hold. The new rating is one step down from Morgan Stanley's previous Overweight (i.e. Buy) recommendation. Meanwhile, the price target, of $35, indicates an 18% upside for PLUG shares. So why did Byrd do it? Plug Power has a lot of advantages to its credit, and is arguably the strongest stock in the fuel cell space right now.
https://www.tipranks.com/news/article/dont-go-bargain-hunting-on-plug-power-stock-quite-yet-says-analyst 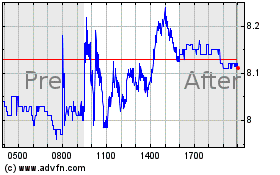