95.92
-2.23 (-2.27%)
Upgrade to Real-Time
Afterhours (Closed)
95.92
Current Report Filing (8-k)
October 27 2021 - 03:54PM
Edgar (US Regulatory)
0000046080false00000460802021-10-222021-10-22
UNITED STATES
SECURITIES AND EXCHANGE COMMISSION
Washington, D.C.  20549
FORM 8-K
CURRENT REPORT
Pursuant to Section 13 or 15(d) of the Securities Exchange Act of 1934
Date of Report (Date of earliest event reported): October 22, 2021
Hasbro, Inc.
(Exact name of registrant as specified in its charter)
Registrant’s telephone number, including area code:   (401) 431-8697
Check the appropriate box below if the Form 8-K filing is intended to simultaneously satisfy the filing obligation of the registrant under any of the following provisions:
☐   Written communications pursuant to Rule 425 under the Securities Act (17 CFR 230.425)
☐   Soliciting material pursuant to Rule 14a-12 under the Exchange Act (17 CFR 240.14a-12)
☐   Pre-commencement communications pursuant to Rule 14d-2(b) under the Exchange Act (17 CFR 240.14d-2(b))
☐   Pre-commencement communications pursuant to Rule 13e-4(c) under the Exchange Act (17 CFR 240.13e-4(c))
Securities registered pursuant to Section 12(b) of the Act.
Indicate by check mark whether the registrant is an emerging growth company as defined in Rule 405 of the Securities Act of 1933 or Rule 12b-2 of the Securities Exchange Act of 1934.
Emerging growth company    ☐
If an emerging growth company, indicate by check mark if the registrant has elected not to use the extended transition period provided pursuant to Section 13(a) of the Exchange Act.  ☐
Item 5.02 Departure of Directors or Certain Officers; Election of Directors; Appointment of Certain Officers; Compensatory Arrangements of Certain Officers.
As announced on October 10, 2021, Richard S. Stoddart, most recently the Lead Independent Director of the Board of Directors (the “Board”) of Hasbro, Inc. (the “Company”), was appointed interim CEO of the Company. On October 22, 2021, the Board, based on the recommendation of the Compensation Committee of the Board, approved the compensation to be paid to Mr. Stoddart in his role as interim CEO. Mr. Stoddart will receive an annual base salary of $1.5 million and restricted stock units having a grant date value of $2.5 million. The restricted stock units, granted under the Company’s Restated 2003 Stock Incentive Performance Plan, as amended, will vest in full one year after the date of grant, contingent on Mr. Stoddart continuing to serve on the Board of the Company during that period and continuing to serve as the interim CEO of the Company during the period of time over that one year period as requested by the Board.
Mr. Stoddart, age 58, has served as a member of the Board since 2014 and is the former President and Chief Executive Officer of global marketing execution firm InnerWorkings, Inc., serving in that role from 2017 until 2020 when InnerWorkings, Inc. was acquired. Prior to that, Mr. Stoddart was the Chief Executive Officer of Leo Burnett Worldwide from February 2016 to 2017, the Chief Executive Officer of Leo Burnett North America from 2013 to 2016 and the President of Leo Burnett North America from 2005 to 2013.
SIGNATURES
Pursuant to the requirements of the Securities Exchange Act of 1934, the registrant has duly caused this report to be signed on its behalf by the undersigned hereunto duly authorized.
Hasbro (NASDAQ:HAS)
Historical Stock Chart
From Dec 2021 to Jan 2022 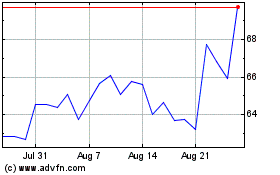 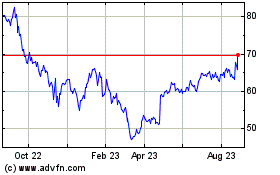 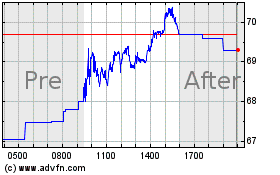