Boca Raton, FL – June 22, 2021 -- InvestorsHub NewsWire -- Dynamite Entertainment, a leading independent publisher of comic books and graphic novels, today announced that it has partnered with Curiosity Ink Media - a producer of original multiplatform entertainment for kids and families - to create books for kids that are rooted in Curiosity's original intellectual property (IP) as well as titles the company will develop for other brands. The alliance begins in earnest with the first titles slated to hit shelves beginning in spring, 2022 and brings Curiosity, which recently entered into an agreement to be acquired by Grom Social Enterprises, Inc., (NASDAQ: GROM) squarely into the publishing arena. The announcement was made jointly by Dynamite CEO and Publisher, Nick Barrucci and Russell Hicks, Curiosity Ink Media's Chief Content Officer.

The first two properties to hit shelves will be: Curiosity Books' "Baldwin's Big Adventure," a picture book about an unassuming, but fearless switcher train with a giant heart and; an activity book for preschoolers based on the wildly popular PAW PatrolTM produced by Spin Master Entertainment and airing on Nickelodeon.

Following the debut of "Baldwin's Big Adventure," a visually rich picture book for preschoolers, and PAW Patrol, in Book-Plus Novelty Format, Dynamite and Curiosity will publish additional titles including entries in the red-hot graphic novel category. Additionally, it was announced that Dynamite will serve as the distributor of record for Curiosity's wide-ranging catalogue of licensed properties and original content for publishing.

In the partnership, Jon I. Rosenberg who heads publishing for Curiosity, will lead the alliance in cultivating Curiosity's licensed and original IP (intellectual property) into books and consumer products for today's kids and families. A veteran publisher who held executive positions at MGM Studios Licensed Publishing Division and Silver Dolphin Books, Rosenberg brings 20+ years of industry experience to the new development initiative before taking the reins at Curiosity Books in 2017.

A proven publisher in adult-targeted comic books and graphic novels, Dynamite is dedicated to serving a variety of consumers through comic and picture book storytelling. Among some of the company's current offerings for young adults and kids include Nancy Drew, Rainbow Brite, Grumpy Cat, Fruit Ninja and Bob's Burgers.

"Dynamite publishing is energized by our alliance with Curiosity Books. The best way to grow the industry is to have diverse offerings for younger readers, and then encouraging them to continue to read both our children's books, and then our comics, and all segments of the industry will grow," said Dynamite CEO/Publisher Nick Barrucci. "By offering Curiosity's immersive content alongside our proven portfolio of best-selling properties, Dynamite can embrace a wider fan base with new, premium titles."

"Locking arms with Dynamite underscores Curiosity's commitment to premium publishing and our mission to entertain kids through unique immersive storytelling content," said Rosenberg. "Dynamite shares our vision of promoting reading as one of the joys in life we hope to instill in kids at a young age and embrace as a life-long habit."

About Dynamite Entertainment
Dynamite was founded in 2004 and is home to several best-selling comic book titles and properties, including The Boys, The Shadow, Red Sonja, Warlord of Mars, Bionic Man, A Game of Thrones, and more. Dynamite owns and controls an extensive library with over 3,000 characters (which includes the Harris Comics and Chaos Comics properties), such as Vampirella, Pantha, Evil Ernie, Smiley the Psychotic Button, Chastity, and Peter Cannon: Thunderbolt. In addition to their critically-acclaimed titles and bestselling comics, Dynamite works with some of the most high-profile creators in comics and entertainment, including Gail Simone, Christopher Priest, Leah Moore, Kevin Smith, David Walker, Vita Ayala, Danny Lore, Neil Gaiman, Garth Ennis, Darick Robertson, Mark Russell, Brandon Thomas, Amy Chu, Reginald Hudlin, Nancy Collins, David Walker, Steve Orlando, Greg Pak, Jenny Frison, Matt Wagner, and a host of up-and-coming new talent. Dynamite is consistently ranked in the upper tiers of comic book publishers and several of their titles - including Alex Ross and Jim Krueger's Project Superpowers - have debuted in the Top Ten lists produced by Diamond Comics Distributors. In 2005, Diamond awarded the company a GEM award for Best New Publisher and another GEM in 2006 for Comics Publisher of the Year (under 5%) and again in 2011. The company has also been nominated for and won several industry awards, including the prestigious Harvey and Eisner Awards.

Grom Social Enterprises, Inc. is a growing social media platform and original content provider of entertainment for children under 13 years of age, which provides safe and secure digital environments for kids that can be monitored by their parents or guardians. The Company has several operating subsidiaries, including Grom Social, which delivers its content through mobile and desktop environments (web portal and apps) that entertain children, let them interact with friends, access relevant news, and play proprietary games while teaching them about being good digital citizens. The Company owns and operates Top Draw Animation,, which produces award-winning animation content for some of the largest international media companies in the world. Grom also includes Grom Educational Services, which has provided web filtering services for K-12 schools, government and private businesses. For more information, please visit.gromsocial.com. 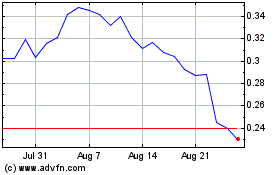 Grom Social Enterprises (NASDAQ:GROM)
Historical Stock Chart
From May 2021 to May 2022 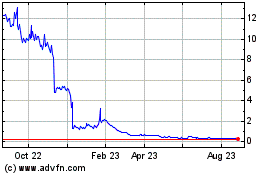 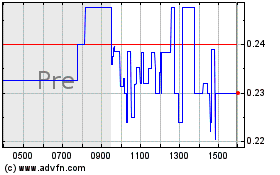