* Not for trading; only in connection with the registration of American Depositary Shares.

2022 Annual Meeting of Shareholders
On June 7, 2022, Chemomab Therapeutics Ltd. (the “Company”) held its 2022 Annual Meeting of Shareholders (the “Annual Meeting”). There were 84,756,220 ordinary shares, no par value, of the Company (equivalent to 4,237,811 American Depositary Shares, each representing twenty (20) ordinary shares) represented in person or by proxy at the Annual Meeting, constituting approximately 37.16% of the outstanding ordinary shares on April 28, 2022, the record date for the Annual Meeting.
The matters voted upon at the Annual Meeting and the final results of such voting are set forth below:
Proposal 1: To re-elect Dr. Nissim Darvish to serve as a Class I director of the Company to hold office until our 2025 annual general meeting of shareholders or until his successor is duly elected and qualified or until his earlier death, resignation or removal.
In accordance with the Company’s definitive proxy statement filed with the Securities and Exchange Commission (the “SEC”) on April 28, 2022, the Company originally proposed the re-election of Mr. Joel Maryles as a Class I director. On May 31, 2022, and as reported on the Current Report on Form 8-K filed with the SEC on June 1, 2022, Mr. Maryles notified the board of directors of the Company that he will not stand for re-election at the Annual Meeting, and therefore the Company did not tabulate any votes received in connection with Mr. Maryles’ re-election as a Class I director.
Proposal 2: To approve an amendment to the terms of compensation of Dr. Adi Mor, the Company’s Co-Founder, Chief Scientific Officer and Class III Director.
The amendment to the terms of engagement of Dr. Adi Mor, the Company’s Chief Scientific Officer, which was approved under Proposal 2 is further described in the Proxy Statement.
- 2 -
Proposal 3: To grant additional equity grants to certain of the Company's directors and certain changes to the Company’s director compensation package, all in compliance with the Company's Compensation Policy.

As previously reported by the Company under additional proxy materials on Schedule 14A, which was filed with the SEC on May 31, 2022, the board of directors of the Company resolved to withdraw Proposal 3 and, therefore, the Company did not tabulate any votes received in connection therewith.
Proposal 4: The approval of the reappointment of Somekh Chaikin, a member of KPMG International, as the Company’s independent auditors and to authorize the board of directors of the Company to delegate to the audit committee the authority to fix the said independent auditors’ remuneration in accordance with the volume and nature of their services.
- 3 -
SIGNATURE
Pursuant to the requirements of the Securities Exchange Act of 1934, the registrant has duly caused this report to be signed on its behalf by the undersigned hereunto duly authorized.
- 4 -
Chemomab Therapeutics (NASDAQ:CMMB)
Historical Stock Chart
From Jul 2022 to Aug 2022 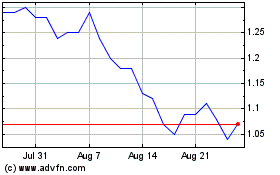 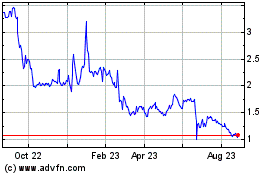 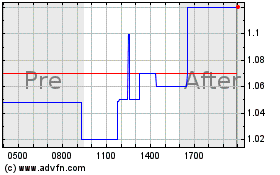