The information required in the remainder of this cover page shall not be deemed to be “filed” for the purpose of Section 18 of the Securities Exchange Act of 1934 (“Act”) or otherwise subject to the liabilities of that section of the Act but shall be subject to all other provisions of the Act (however, see the Notes).

This Amendment No. 2 to Schedule 13G (“Amendment No. 2”) amends and supplements the statement on Schedule 13G originally filed with the Securities and Exchange Commission on September 27, 2016, as amended to date (the “Prior Filing”), and relates to Series A preferred units representing limited partnership interests (“Series A Preferred Units) in Blueknight Energy Partners, L.P., a Delaware limited partnership (the “Issuer”).

The principal executive offices of the Issuer are located at 6060 American Plaza, Suite 600, Tulsa, Oklahoma 74135.

This Schedule 13G is being filed jointly by Blueknight Energy Holding, Inc., Vitol Refining Group B.V., Vitol Holding B.V., Vitol Holding II S.A, Benjamin L. Marshall and Richard J. Evans, pursuant to an Agreement of Joint Filing attached hereto as Exhibit A. Information with respect to each Reporting Person is given solely by such Reporting Person, and no Reporting Person assumes responsibility for the accuracy or completeness of the information furnished by any other Reporting Person. Pursuant to Rule 13d-4 of the Act, the Reporting Persons expressly declare that the filing of this statement shall not be construed as an admission that any such person is, for the purposes of Section 13(d) and/or Section 13(g) of the Act or otherwise, the beneficial owner of any securities covered by this Schedule 13G held by any other person.

Item 4 is hereby supplemented as follows:

If this statement is being filed to report the fact that as of the date hereof the reporting person has ceased to be the beneficial owner of more than five percent of the class of securities, check the following ☑.

After reasonable inquiry and to the best of his or its knowledge and belief, each of the undersigned certifies that the information set forth in this statement is true, complete and correct. 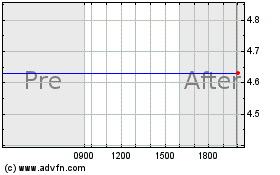