1,577.08
-20.77 (-1.30%)
Real-Time
Market Open
1,577.08
Chiliz (CHZ) Records Higher Gains During Market Uncertainty
November 17 2022 - 11:50AM
NEWSBTC
Popular fan token CHZ has printed substantial gains in the last week as football fans prepare for 2022’s world cup event. As of writing, the token is trading at a 2.20% gain on the day. Plus, its week-on-week chart looks green. Specifically, the 34th largest token by market cap still keeps over 9% gains from last week.  However, the fan-themed token also witnessed a sizeable decrease in trading volume over the past 24 hours. Approximately $571,090,877 worth of CHZ has exchanged hands in the last day, representing a 38% decrease. The token might see more trades soon as the official opening match of the world cup is just four days away. Related Reading: Cosmos (ATOM) Trades Below $13 As Bulls Give Up; Here Are Levels Bulls Will Buy CHZ To Bail Out Stranded Holders on FTX Alexandre Dreyfus, CEO of Chiliz, said on Twitter that the company would set aside 38 million CHZ to assist affected FTX users. According to the tweet, the company will compensate each victim with $10,000. The company’s head added that the 38 million CHZ bailout fund would go to FTX subscribers who couldn’t withdraw after the exchange’s collapse. However, he mentioned that only FTX users who owned CHZ on the exchange would receive the $10,000 payout. According to the tweets, the 38 million CHZ indicates the on-chain amount FTX exchange held in its wallet up to the previous week.  The company’s latest initiative “will be just for private users and not for institutions,” Chiliz added. However, “full legal assessment and clearance from the liquidator to send us the list of users” must first be obtained. On November 12, hackers stole more than $400 million from the already troubled FTX exchange. This occurred shortly after the exchange had filed for bankruptcy, only hours before. Sadly, Dreyfus claims that the attack resulted in the loss of 37 million CHZ. The Bulls Fueling A Convincing CHZ Rally – Can They Succeed? After establishing long-term support in the $0.15 area, the bulls were able to stage a convincing rally. This recovery brought in a huge 25.5% ROI in just six days. Meanwhile, in the four-hour time frame, CHZ broke out of a bullish flag. CHZ climbed back up over the $0.22 resistance after the pattern break. In addition, both the 20 EMA (red) and the 50 EMA (cyan) were going north and trying to finish above the 200 EMA (green). The possibility of a bullish crossover may bolster optimistic short-term outlooks. The sellers may be able to keep the buyers in check if CHZ’s price breaks the $0.24 resistance level. The first major support for a bearish reversal, whether it happens right away or in the future, is between $0.20 and $0.21. A sustained move over $0.24 would signal buyers are committed to pushing prices higher. Under these conditions, the first significant barrier is around $0.27 and $0.29. Related Reading: Ethereum Price Showing Early Signs of Fresh Drop, But This Support Is Key The Relative Strength Index’s rise over the 50 levels indicated a momentum change favoring buyers. The MACD line (blue) also rose above zero, confirming the bullish RSI reading. If the orange signal line closes decisively above the zero line, buyers may try to time their entry. Featured image from Pixabay and chart from TradingView.com
Ethereum (COIN:ETHUSD)
Historical Stock Chart
From Dec 2022 to Jan 2023 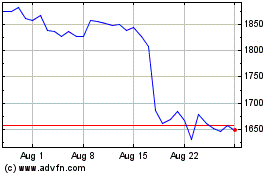 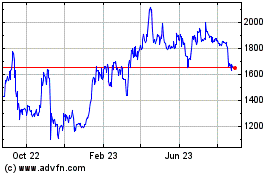 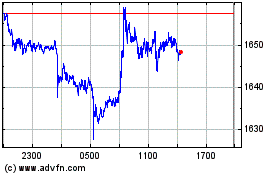