TORONTO, July 29, 2022 /CNW/ - Denison Mines Corp. ("Denison" or the "Company") (TSX: DML) (NYSE American: DNN) has noted the disclosure made by Uranium Energy Corp. ("UEC") in its news release dated July 28, 2022. Denison hereby confirms that it has made a confidential proposal (an "Acquisition Proposal") to UEX Corporation ("UEX") to acquire all of the issued and outstanding shares of UEX.  UEX has reported that its Board of Directors, in consultation with its legal and financial advisors, has determined that the Acquisition Proposal constitutes a "Superior Proposal" as defined in the Arrangement Agreement between UEC and UEX dated June 13, 2022 ("Original Agreement").  Denison understands that notice of such determination was provided to UEC on July 28, 2022. View PDF version

The non-binding Acquisition Proposal remains subject to the entering into of a definitive arrangement agreement ("Definitive Agreement") and any discussions with respect to a transaction remain subject to the terms of a non-disclosure agreement ("NDA") entered into between Denison and UEX.  At this time, no Definitive Agreement has been consummated between Denison and UEX, and the completion of any such agreement would require the termination of the Original Agreement in accordance with its terms.

David Cates, President & CEO of Denison, commented: "We believe that an acquisition by Denison of UEX, and its assets in northern Saskatchewan, has the potential to benefit Denison shareholders – bolstering Denison's position as a leading uranium development and exploration Company with an unwavering focus on the advancement of high-grade uranium deposits in the Athabasca Basin region.

Importantly, an acquisition of UEX would allow Denison to consolidate 100% ownership in our flagship Wheeler River Project at an ideal time ahead of the anticipated final technical de-risking steps associated with the Feasibility Study in progress for the planned Phoenix In-Situ Recovery ("ISR") operation."

An acquisition of UEX has the potential to yield multiple benefits to Denison shareholders:

Denison is a uranium exploration and development company with interests focused in the Athabasca Basin region of northern Saskatchewan, Canada. In addition to its effective 95% interest in the Wheeler River project, Denison's interests in the Athabasca Basin include a 22.5% ownership interest in the McClean Lake joint venture, which includes several uranium deposits and the McClean Lake uranium mill that is contracted to process the ore from the Cigar Lake mine under a toll milling agreement, plus a 25.17% interest in the Midwest Main and Midwest A deposits, and a 66.90% interest in the Tthe Heldeth Túé ("THT", formerly J Zone) and Huskie deposits on the Waterbury Lake property. The Midwest Main, Midwest A, THT and Huskie deposits are each located within 20 kilometres of the McClean Lake mill.

Certain information contained in this news release constitutes 'forward-looking information', within the meaning of the applicable United States and Canadian legislation concerning the business, operations and financial performance and condition of Denison.

In particular, this news release contains forward-looking information pertaining to the following: the existence and terms of the Acquisition Proposal, including the conditions and other rights and obligations of the parties and any potential benefits of such a transaction; expectations regarding the potential to enter into a Definitive Agreement and/or complete a transaction pursuant thereto; and expectations regarding its joint venture ownership interests and the continuity of its agreements with its partners.

Forward looking statements are based on the opinions and estimates of management as of the date such statements are made, and they are subject to known and unknown risks, uncertainties and other factors that may cause the actual results, level of activity, performance or achievements of Denison to be materially different from those expressed or implied by such forward-looking statements. For example, the conditions to the transactions may not be satisfied or the parties may negotiate terms materially different than disclosed herein. Denison believes that the expectations reflected in this forward-looking information are reasonable and no assurance can be given that these expectations will prove to be accurate and results may differ materially from those anticipated in this forward-looking information. For a discussion in respect of risks and other factors that could influence forward-looking events, please refer to the factors discussed in the Annual Information Form dated March 25, 2022 under the heading "Risk Factors". These factors are not, and should not be construed as being exhaustive. 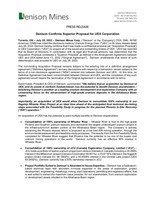 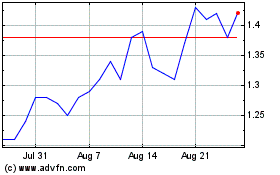 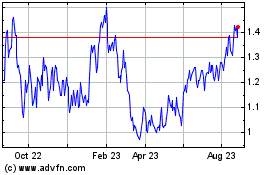 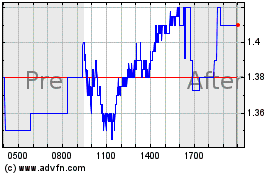