On June 11, 2020, upon the recommendation by the Nominating and Corporate Governance Committee of Zion Oil & Gas (the “Company”), the Board of Directors (the “Board”) appointed Mr. Robert Dunn as Chief Executive Officer. Mr. Dunn will also continue in his role as Chief Operating Officer. Effective June 11, 2020, Mr. John Brown has resigned from his position as Chief Executive officer and will remain as the Executive Chairman of the Board without any change to the terms his Employment Agreement dated January 1, 2014.

Robert Dunn joined the Company as Director of Operations, effective May 1, 2019 and was appointed Senior Vice President and Chief Operating Officer on June 13, 2019. Mr. Dunn’s impressive resume includes over 26 years of senior management and field operations focusing on technologically driven seismic acquisition across the globe. During the past decade of working in the Eastern Hemisphere, Mr. Dunn has acquired more than 7,800 square kilometers of 3D and 10,000 kilometers of 2D seismic surveys, which have helped exploration and production customers to make informed decisions in their exploration programs.

Mr. Dunn’s considerable experience extends to the early ’90s and includes logistics/acquisition management in remote regions ranging from the Arctic to South American jungles as Project Manager and Technical/Recording Crew Manager for CGG Veritas, where his innovations helped Veritas become the largest and most trusted name in the geophysical industry. Mr. Dunn was President of Geophysical for Viking Services from 2012 before joining Zion. In that capacity, Mr. Dunn managed all aspects of geophysical exploration in Europe, Turkey, and Africa, seeing Viking acquire over 7,800 square kilometers of 3D seismic and 10,000 kilometers of 2D seismic. During his tenure, Mr. Dunn also implemented operational plans in Hungary, Romania, Bulgaria, and Iraq as Managing Director of Central European Drilling and Oilfield Services in Northern Iraq. Before this, Mr. Dunn oversaw Viking’s acquisition of over 2,200 square kilometers of 3D seismic as Technical Operations Manager, leading to the discovery of new basins. Mr. Dunn is a member of the Society of Exploration Geophysicists, the European Association of Geophysical Exploration and the American Chamber of Commerce. He holds several technical certifications from industry groups.

Appointment to Board of Directors

Upon the recommendation of the Nominating and Corporate Governance Committee, the Board appointed Mr. Robert Dunn to the Board of Directors, effective June 11, 2020, to fill a vacancy on the Board as a Class III Director.

In connection with his promotion to Chief Executive Officer and election to the Board, Mr. Dunn will continue to receive his annual salary of $250,000, as well as other employee benefits, pursuant to his Employment Agreement effective May 1, 2019. Mr. Dunn owns 50,000 shares of Company stock and has an additional 50,000 vested options to purchase additional Company stock.

Mr. Dunn is not a party to any other material plan, contract or arrangement with the Company, nor has any other material plan, contract or arrangement to which he is a party been modified as a result of their respective promotions described above. In addition, Mr. Dunn does not have any familial relationships or related party transactions with the Company that would require disclosure under Items 401(d) or 404(a) of Regulation S-K (17 CFR 229.401(d) and 229.404(a)) in connection with his promotion described above.

Pursuant to the requirements of the Securities Exchange Act of 1934, the registrant has duly caused this report to be signed on its behalf by the undersigned hereto duly authorized. 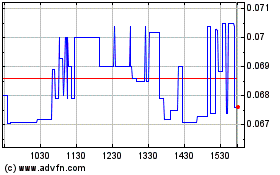