Three Unknown Public Companies Set to Drive the Explosion of The AR/VR Worlds as Access, Adoption, and Adaptation Become Commonplace.

There is no doubt that the Virtual Reality (VR) and Augmented Reality (AR) industry means big money with global sales estimates predicted at 75 billion by 2021, and a staggering 121 billion within ten years. Nearly triple that of the potential Cannabis market. This same sector is the focus of publicly traded market giants such as Google (NASDAQ: GOOGL), Facebook (NASDAQ:FB), Microsoft (NASDAQ: MSFT), Apple, Inc. (NASDAQ:AAPL), and Sony (NYSE:SNE).

But there are a few gems that in comparison are relatively unknown to the general public and traditional investors. These companies although small are true leaders in their specific disciplines but they all have one thing in common. That is that they are driving the adaption of AR/VR by the general public by making the experiencing, creation and development of products accessible

Patents May Decide the Industry

With virtually all the technology and social media giants investing heavily with varying strategies, the one thing that they are all chasing as the "Holy Grail" are a few key cornerstone Patents. The first of the significant cornerstone patents that control the Intellectual property of capturing and distributing Virtual Reality and Augmented Reality was owned by Oculus which made up the majority of its 2-Billion-dollar price tag that Facebook ponied up.  Apples purchase of NextVR for 100 million is rumored to be primarily in order to gain control of another cornerstone patent technology supporting high quality video streams of music and sporting events to VR headsets. Although NextVR holds over 40 technology patents in total, it is this one Patent that is rumored to be the sparkle in Apples eye. Microsoft hold thousands of Patents and is likely to hold at least a few pieces to the patent puzzle. 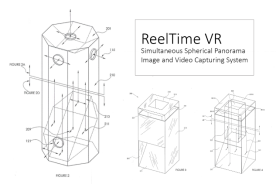 One of the other likely Cornerstone patents was featured in a special "Bold Patent" spot on CNBC during Shark tank in which CEO Barry Henthorn appeared, is ReelTimes' patent Number 10,761,303 that was just issued by the USPTO on September 1, 2020. The patent covering apparatus and method claims for technology involving simultaneous capturing of 360 X 360 degree Spherical Panorama Images and Video. According J.D. Houvener, CEO of Bold Patents and author of "Bold Ideas," "The intellectual property contained in the patent application we filed on behalf of ReelTime VR has the potential to be completely industry shaping. Our team of experts was able to articulate the claims of the invention quite broadly so as to provide ReelTime VR with the strongest and broadest protections available to them."

Although the original technology allows any cell phone or other camera to instantaneously capture 360 X 360 Virtual Reality Video or pictures without any need for stitching, the patent provides protection from infringement from any capturing of a plurality of images utilizing at least one mirror. This spans a wide range of industries and uses and is likely being infringed upon or would need to be licensed by numerous larger players.

That brings us to the first Company on our list which is innovative content and technology leader ReelTime VR (OTCPK:RLTR). www.reeltime.com Not only is ReelTime VR an innovative content creator but an elite development and technology leader. ReelTime VR among other things produced the number one VR travel series in the world starring international superstar Front Montgomery and her daughter Leonie Montgomery "In Front of View" www.infrontofview.com and the most watched VR tween series in the world featuring the "Really Twins" Twins in you guessed it "Really Twins" www.reallytwins.com . It is the proprietary technology and methodologies that it utilizes however in production that allow it to produce in VR simultaneously as in traditional flat video that landed their content on Amazon Prime Video making it the first and only content originally shot in VR to have been able to do so. This opens up all forms of monetization for content and in the entertainment world where "Content is King" and distribution is an army, ReelTime has them both.

ReelTimes Patent that brings the ability to produce and share VR to the general consumer along with its persistence in creating content and technologies that are at the forefront of the industry make ReelTime a company to watch now before the word gets out. If you are feeling patriotic then it may be of note that ReelTime is the only company to make this list that is truly 100% an American company with the other two being foreign filers.  Reeltime is also the only one of the three that has shown gains over the past 90 days leveling off for some very good buys.

Staying with the notion that making it easier for consumers and businesses to create and utilize VR is a driving force as it is with ReelTime, the same could be said about AR with Imagine AR Inc. (CSE:IP) (OTCQB:IPNFF) ImagineAR is an Augmented Reality Company that enables sports teams, businesses and enterprises to instantly create their own AR mobile campaigns. They have recently signed a two year partnership agreement with Valencia C.F., one of the biggest soccer clubs in the world to provide its Augmented Reality Platform for fan activation and engagement in addition to signing a 5 year agreement with the NFL Alumni Association Academy to provide its Augmented Reality Platform for the launch of their new NFLA mobile interactive products.  This agreement provides for equal program revenue sharing over the 5-year term. They also have a fairly solid list of clients and collaborations https://imaginear.com/clients that they are building upon. 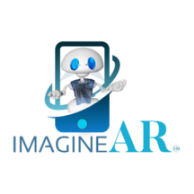 growing uses for Augmented Reality (AR) gaming where geolocation is a key part of the gameplay. https://imaginear.com/patents . Although ImagineARs patents may not have industry shaping ramifications, the core elements of their niche and how it applies specifically to their gameplay look to be well defined and well protected.

The stock has suffered significantly over the past 90 days but that is after a strong run up in June and July making it a six-month performer with an explosive potential. Because they are reducing the barriers of entry for business to develop and utilize AR for the benefit of their company and the consumer experience in whole puts ImagineAR as one of our top three unknown players that just may carve a solid stake in the AR world.

While both of the other two companies to make our list are focused on making AR/VR accessible and enjoyable by the mass market, NexTech AR Solutions (CSE:NTAR) (OTC:NEXCF) a rapidly growing leader in the exploding AR industry, provides businesses with augmented reality solutions that help drive their bottom line and competitive advantage. Whether for product promotion, increased sales, product training, or brand evangelism, NexTech AR is focusing on several key multi-billion-dollar verticals including fashion & apparel, footwear, and luxury goods. 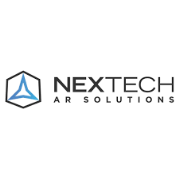 NextTech AR has managed to secure quite the list of Blue-chip customers having beat out many much larger and better funded competitors. https://www.nextechar.com/customers They have recently announced that it is launching its new "Genie in the Bottle" augmented reality marketing program. The Genie in the Bottle program will first be used in Q4 2020 to promote a new proprietary line of organic human supplement products developed by Nextech called 'TruLyfe'.  Demo video of Genie https://vimeo.com/463141459

Genie in the Bottle is a human hologram, in the form of an interactive dietician, that shares nutritional insights and information with customers who scan the 'TruLyfe' supplements QR code through the NexTech AR app. This platform will mark the beginning of a new way for eCommerce brands to directly reach their customers through an immersive episodic storytelling experience unlike anything seen before.

Like Imagine AR, NextTech AR has taken a bath over the past six months but that is also due to a sharp rise leading up to it so there may be opportunities left here.

Their ability to create platforms that have been vetted at the highest of standards, an ability to generate revenues, and the general interest in the space place NextTech on our list even though they lack the mass public appeal and accessibility of the other two.

However you place your bets on the new AR/VR phenomenon, keep a keen eye on these three public companies that have significant potential to be strong forces in the industry and one just may reshape our entire reality.

For more information on all things relating to virtual reality, augmented reality, or your reality head over to www.virtualrealityinsider.com

Disclaimer** VRI nor any of its staff were compensated for the creation and/or publication of this article. VRI makes no representations nor warrantees of any kind whatsoever regarding any of the information contained herin. This is not a solicitation nor recommendation to purchase any stock or other products from the companies mentioned or any other companies. This article is solely for the purpose of informing our readers of information that was obtained through public sources. 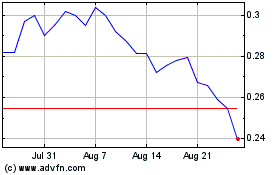 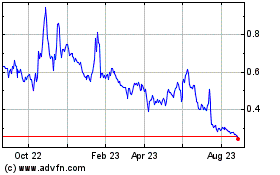 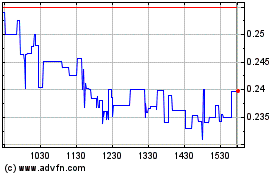