If an emerging growth company, indicate by checkmark if the registrant has elected not to use the extended transition period for complying with any new or revised financial accounting standards provided pursuant to Section 13(a) of the Exchange Act. [  ]

Effective 17 November 2020, Data443 Risk Mitigation, Inc. (the “Company”) entered into an agreement with an existing lender to settle a dispute regarding a convertible promissory note, and exchanged that note for a newly issued note. The disputed note, referred to herein as the “Smea2z Note”, was originally issued on 23 October 2018 in favor of SMEA2Z LLC in the original principal amount of Two Hundred Twenty Thousand Dollars ($220,000), with a variable conversion feature at discount to the market price, and a maturity date of 23 July 2019. Subsequent to the issuance of the Smea2z Note, a series of agreements were executed which amended various terms and conditions of the Smea2z Note, resulting in, among other things, a purported current principal balance of Six Hundred Thousand Eight Hundred Fifty Dollars ($608,850), a variable conversion feature at a deeper discount to the market price, and a maturity date of 30 June 2021. The Smea2z Note was recently acquired by the current holder.

In a separate transaction, effective 18 November 2020, the Company entered into an agreement with three existing investors in the Company (the “Holders”), each of which was the holder of warrants issued the Company. The total number of warrants (collectively, the “Warrants”) held by the Holders totaled 617,682 (which were accounted for in the Company’s financial statements at approximately 300,000,000 warrants after resets and derivative liabilities). The Company and the Holders agreed to exchange the Warrants for three newly issued promissory notes (the “Warrant Exchange Notes”). As a result of the exchange, the Warrants are now cancelled and of no further force and effect.

The Warrants Exchange Notes were issued as of 18 November 2020 in the total original principal amount of One Hundred Thousand Dollars ($100,000). The Warrant Exchange Notes further provide as follows:

The information contained in Item 1.01 of this Current Report on Form 8-K with respect to the Settlement Agreement, Exchange Note, and the Warrant Exchange Notes, inclusive, is hereby incorporated by reference.

The information contained in Item 1.01 of this Current Report on Form 8-K with respect to the Smea2z Note, Settlement Agreement, Exchange Note, Warrants, and Warrant Exchange Notes is hereby incorporated by reference.

On 18 November 2020 the Company issued a press release announcing the cancellation of the Warrants in exchange for the Warrant Exchange Notes. A copy of the press release is attached hereto as Exhibit 99.1.

On 19 November 2020 the Company issued a press release announcing the Settlement Agreement and the cancellation of the Smea2z Note in exchange for the Exchange Note. A copy of the press release is attached hereto as Exhibit 99.2.

The following Exhibits are furnished with this Report: 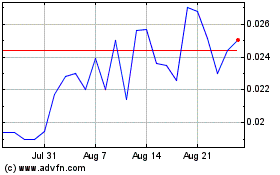 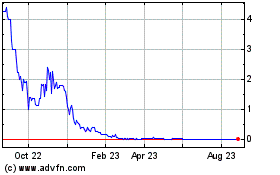 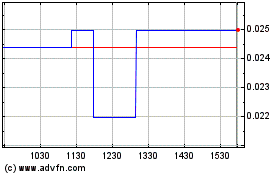