PURSUANT TO SECTION 14F OF THE

NO VOTE OR OTHER ACTION OF THE COMPANY'S SHAREHOLDERS IS REQUIRED IN CONNECTION WITH THIS INFORMATION STATEMENT.  NO PROXIES ARE BEING SOLICITED AND YOU ARE REQUESTED NOT TO SEND THE COMPANY A PROXY.

This Information Statement is being mailed on or about May 20, 2020, to the shareholders of record of common stock of Canna Corporation, Inc., a Colorado corporation (“we”, “us”, or the “Company”), as of the close of business on May 18, 2020 (the “Record Date”).  You are receiving this Information Statement in connection with the resignation and appointment of certain persons that will change a majority of the Company’s Board of Directors pursuant to a change of control transaction as detailed herein.

Description of the Change in Control

On January 16, 2020, Canna Corporation, (the “Company” or the “Registrant”) entered into an agreement attached hereto as Exhibit 10.1 (the “Acquisition Agreement”), to acquire the majority ownership interest of Agra Nutraceuticals Corporation (“Agra”), a Colorado corporation, having a registered business address of 67 SW 12th Ave, Ste 500, Deerfield Beach, Florida 33442. Pursuant to the Acquisition Agreement the Company acquires seventy-seven and one-half percent (77.5%) of the issued and outstanding shares of common stock of Agra to be transferred to it from the majority shareholder of Agra, SBS Eco Trust. In consideration of the acquisition of the Agra shares, the Registrant will issue 803,000 shares of its Series A Preferred Stock and 197,000,000 shares of common stock, all of which has been returned to the Company by Dror Svorai, the Registrant’s majority shareholder, President, CEO and sole officer and director (The “Acquisition”).

Accordingly, effective as of the 10th day after this Information Statement is filed with the Securities and Exchange Commission and transmitted to the shareholders of the Company, the above referenced individuals will be the officers and directors of the Company and the Transaction will be closed.

The following table sets forth certain information concerning the number of shares of our common stock owned beneficially as of the Record Date, by: (i) each of our current directors; (ii) each of our current executive officers; and (iii) each person or group known by us to beneficially own more than 5% of our issued and outstanding shares of common stock.  Unless otherwise indicated, the shareholders listed below possess sole voting and investment power with respect to the shares they own.

(1) The number and percentage of shares beneficially owned is determined under rules promulgated by the SEC and the information is not necessarily indicative of beneficial ownership for any other purpose. Under such rules,

beneficial ownership includes any shares as to which the individual has sole or shared voting power or investment power and also any shares which the individual has the right to acquire within 60 days through the exercise of any stock option or other right. The persons named in the table have sole voting and investment power with respect to all shares of common stock shown as beneficially owned by them, subject to community property laws where applicable and the information contained in the footnotes to this table.

(3) Esther Bittelman is the trustee of SBS Eco Trust and has sole voting and dispositive control over the shares held by the trust.

Identification of Current Executive Officers and Directors of the Company

Our outgoing executive officer and director is as follows:

The background and business experience of our sole executive officer and director is as follows:

Identification of Incoming Executive Officers and Directors of the Company

The following changes to our Executive Officers and Board of Directors shall occur pursuant to the change in ownership of the Company:

Our incoming executive officer and director is as follows:

Daniel Rogers, age 46, is a Director and Treasurer of the Registrant. He has over 10 years executive experience with regulated cannabis companies in 7 states, with broad experience in management and operations of complicated structures and processes in regulated industries. He has over 20-years finance and accounting experience, and has been a previous FDIC licensed bank auditor. He is past Chairman of the State of Colorado Marijuana Industry Group’s Banking / Finance Subcommittee, and was named one of the 20 most influential people in cannabis by the International Business Times – April, 2015. He holds a Seattle Central College Medical Marijuana Consultant Certificate, and serves as a member of the board of directors of various cannabis companies.

We have no significant employees other than the officers and directors described above.

There are no family relationships among our current and incoming officers, directors or persons nominated for such positions.

During the past ten years no current or incoming director, executive officer, promoter or control person of the Company has been involved in the following:

Compliance with Section 16(a) of the Exchange Act

Section 16(a) of the Exchange Act requires the Company's executive officers, directors and persons who own more than 10% of a registered class of the Company's equity securities to file reports of their ownership thereof and changes in that ownership with the Securities and Exchange Commission "SEC") and the National Association of Securities Dealers, Inc. Executive officers, directors and greater than 10% stockholders are required by SEC regulations to furnish the Company with copies of all such reports they file.

Based solely upon its review of copies of such forms received by it, or on written representations from certain reporting persons that other filings were required for such persons, the Company believes that, during the year ended December 31, 2019, its executive officers, directors and 10% stockholders complied with all applicable Section 16(a) filing requirements.

Committees of the Board of Directors

The Company has no formal written employment agreement or other contracts with our current or incoming officers and directors and there is no assurance that the services to be provided by them will be available for any specific length of time in the future. The amounts of compensation and other terms of any full time employment arrangements would be determined, if and when, such arrangements become necessary.

For purposes of determining director independence, we have applied the definitions set out in NASDAQ Rule 5605(a)(2). The OTC Markets Pink Market on which shares of our common stock are quoted does not have any director independence requirements. The NASDAQ definition of “Independent Director” means a person other than an Executive Officer or employee of the Company or any other individual having a relationship which, in the opinion of the Company's Board of Directors, would interfere with the exercise of independent judgment in carrying out the responsibilities of a director.

According to the NASDAQ definition, Mr. Svorai is not an independent director because he was a controlling shareholder and also an executive officer of the Company.  Further, of our incoming directors, Esther Bittelman, will not be an independent director because she is the trustee of SBS Eco Trust, which pursuant to the transactions described herein, is not the controlling shareholder of the Company.

Review, Approval or Ratification of Transactions with Related Persons

Board Leadership Structure and Role in Risk Oversight

We have not adopted a formal policy on whether the Chairman and Chief Executive Officer positions should be separated or combined, however, we have traditionally determined that, due to the small size of the Company and the nature of its operations, it is in the best interests of the Company and its shareholders to combine these roles.

As we had only a single director, the Board of Directors did not hold any general meetings during the Company’s last fiscal year ended December 31, 2019. The Company has no committees. We do not have a formal policy regarding frequency of Board meetings or annual meetings of shareholders.

We know of no material, existing or pending legal proceedings against our Company, nor are we involved as a plaintiff in any material proceeding or pending litigation. There are no proceedings in which our current or incoming directors, officers or any affiliates, or any registered or beneficial shareholder, is an adverse party or has a material interest adverse to our interest.

COMPENSATION OF DIRECTORS AND EXECUTIVE OFFICERS

The following table sets forth the compensation paid to our executive officers during the years ended December 31, 2019 and 2018.

There are no current outstanding equity awards to our executive officers as of December 31, 2019.

There are no arrangements or plans in which we provide pension, retirement or similar benefits for directors or executive officers.

Directors receive no extra compensation for their services to our Board of Directors.

Under Colorado corporate law, shareholders are not entitled to dissenters’ rights with respect to the transactions described in this Information Statement.

We file annual, quarterly and current reports, proxy statements and other information with the SEC.  You may read and copy our reports or other filings made with the SEC at the SEC’s Public Reference Room, located at 100 F Street, N.W., Washington, DC 20549.  You can obtain information on the operation of the Public Reference Room by calling the SEC at 1-800-SEC-0330.  You can also access these reports and other filings electronically on the SEC’s web site, www.sec.gov.

By Order of the Board of Directors,

Sacha Alessandro Ceruti President, CEO and Member of the Board of Directors 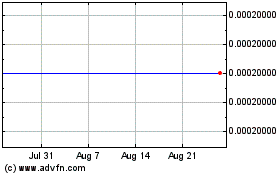 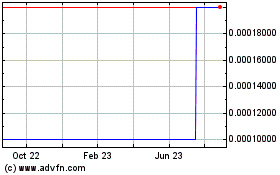 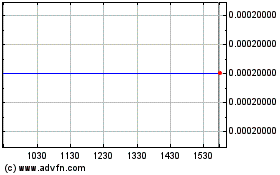