On November 24, 2020, Sunoco LP (the “Partnership”) and Sunoco Finance Corp. (“SUN Finance” and, together with the Partnership, the “Issuers”) completed a private offering to eligible purchasers (the “Notes Offering) of $800,000,000 aggregate principal amount of 4.500% senior notes due 2029 (the “Notes”), along with the related guarantees of the Notes. The Issuers received net proceeds of approximately $790.0 million from the Notes Offering, after deducting the initial purchasers’ discount and commissions and estimated offering expenses payable by the Partnership, and the Partnership used such net proceeds, cash on hand and borrowings under its $1.5 billion revolving credit facility (the “Revolving Credit Facility”) to fund a tender offer (the “Tender Offer”) to purchase any and all of its 4.875% senior notes due 2023 (the “2023 Notes”) and, if applicable, a partial redemption of the 2023 Notes, including fees and expenses incurred in connection therewith. The Notes were issued in a transaction exempt from the registration requirements of the Securities Act of 1933, as amended (the “Securities Act”), and were resold by the initial purchasers in reliance on Rule 144A and Regulation S of the Securities Act.

The Notes were issued under and are governed by an indenture dated November 24, 2020 (the “Indenture”), among the Issuers, certain subsidiary guarantors of the Partnership (the “Guarantors”) and U.S. Bank National Association, as trustee (the “Trustee”). The Notes will mature on May 15, 2029 and interest on the Notes is payable semi-annually on May 15 and November 15 of each year, commencing May 15, 2021.

Upon the occurrence of a Change of Control (as defined in the Indenture), which occurrence (other than one involving the adoption of a plan relating to liquidation or dissolution) is followed by a ratings decline within 90 days after the consummation of the transaction, the Issuers may be required to offer to purchase the Notes at a purchase price equal to 101% of the aggregate principal amount of the Notes repurchased, plus accrued and unpaid interest to, but excluding, the repurchase date. Additionally, if the Partnership sells certain assets and does not apply the proceeds from the sale in a certain manner, the Issuers must use certain excess proceeds to offer to repurchase the Notes at 100% of the principal amount of the Notes, plus accrued and unpaid interest, if any, to, but not including, the repurchase date.

The Indenture contains customary events of default (each an “Event of Default”), including the following:

(1) default for 30 days in the payment when due of interest on the Notes;

(2) default in the payment when due (at maturity, upon redemption or otherwise) of the principal of, or premium, if any, on the Notes;

(4) failure by the Partnership for 180 days after notice to comply with its obligations to furnish the holders of the Notes and the Trustee certain reports;

(5) failure by the Issuers or any Guarantor for 60 days after written notice to comply with their other covenants or agreements in the Indenture;

(6) default under any mortgage, indenture or instrument under which there may be issued or by which there may be secured or evidenced any indebtedness for money borrowed by the Partnership or any of its restricted subsidiaries (or the payment of which is guaranteed by the Partnership or any of its restricted subsidiaries) whether the indebtedness or guarantee now exists, or is created after the issue date of the Notes, if that default (a) is caused by a failure to pay principal of, or interest or premium, if any, on the indebtedness prior to the expiration of the grace period provided in the indebtedness on the date of the default (a “Payment Default”) or (b) results in the acceleration of the indebtedness prior to its express maturity, and, in each case, the principal amount of any of the indebtedness, together with the principal amount of any other indebtedness under which there has been a Payment Default or the maturity of which has been so accelerated, aggregates $50.0 million or more, subject to certain exceptions;

(7) failure by the Issuers or the Partnership’s restricted subsidiaries to pay final judgments aggregating in excess of $50.0 million, which judgments are not paid, discharged or stayed for a period of 60 days;

(8) except as permitted under the Indenture, any guarantee is held in any judicial proceeding to be unenforceable or invalid or ceases for any reason to be in full force and effect, or any Guarantor, or any person acting on behalf of any Guarantor, denies or disaffirms its obligations under its guarantee; and

If an Event of Default occurs and is continuing, the Trustee or the holders of at least 25% in aggregate principal amount of the then outstanding Notes may declare the Notes to be due and payable. Upon such a declaration, such principal and accrued and unpaid interest on the Notes will be due and payable immediately. If an Event of Default relating to certain events of bankruptcy, insolvency or reorganization with respect to the Issuers or any of the Partnership’s significant subsidiaries or any group of the Partnership’s restricted subsidiaries that, taken together, would constitute a significant subsidiary, occurs and is continuing, all outstanding Notes will become due and payable immediately without further action or notice on the part of the Trustee or any holders of the Notes. Under certain circumstances, the holders of a majority in principal amount of the outstanding Notes may rescind any such acceleration with respect to the Notes and its consequences.

cause the exchange offer to be completed within 365 days of November 24, 2020 (the “Exchange Date”), and if they cannot effect the exchange offer within such period or in certain other circumstances, they will use commercially reasonable efforts to cause a shelf registration statement for the resale of the Notes to become effective. If the Issuers and the Guarantors fail to satisfy these obligations on a timely basis, an additional 0.25% of interest will accrue on the Notes for the first 90-day period following the Exchange Date and an additional 0.25% of interest for each additional 90-day period that elapses until the exchange offer is completed or the shelf registration statement is declared (or becomes) effective, as applicable, up to a maximum of 1.00% per year.

The information set forth in Item 1.01 relating to the Indenture under the heading “Indenture and Senior Notes” is hereby incorporated into this Item 2.03 by reference.

On November 24, 2020, the Partnership issued a press release announcing the early results of its previously announced Tender Offer. A copy of the press release is furnished as Exhibit 99.1 to this Current Report on Form 8-K and is incorporated in this Item 7.01 by reference.

The information included herein (including the exhibits) shall not be deemed “filed” for purposes of Section 18 of the Securities Exchange Act of 1934, as amended (the “Exchange Act”), or incorporated by reference in any filing under the Securities Act, or the Exchange Act, except as shall be expressly set forth by specific reference in such a filing. This Current Report on Form 8-K does not constitute a notice of redemption under the optional redemption provisions of the indenture governing the 2023 Notes, nor does it constitute an offer to sell, or the solicitation of an offer to buy, any security, including the Notes. 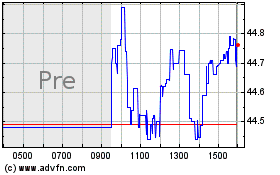