If the filing person has previously filed a statement on Schedule 13G to report the acquisition that is the subject of this Schedule 13D, and is filing this schedule because of §§240.13d-1(e), 240.13d-1(f) or 240.13d-1(g), check the following box. ☐
Note:  Schedules filed in paper format shall include a signed original and five copies of the schedule, including all exhibits.  See Rule 13d-7 for other parties to whom copies are to be sent.
*The remainder of this cover page shall be filled out for a reporting person’s initial filing on this form with respect to the subject class of securities, and for any subsequent amendment containing information which would alter disclosures provided in a prior cover page.
The information required on the remainder of this cover page shall not be deemed to be “filed” for the purpose of Section 18 of the Securities Exchange Act of 1934 or otherwise subject to the liabilities of that section of the Act but shall be subject to all other  provisions of the Act (however, see the Notes).
This Amendment No. 3 to Schedule 13D (this “Schedule 13D”) relates to the ordinary shares, nominal value €0.02 per share, (“Ordinary Shares”) of Sequans Communications S.A., a société anonyme incorporated in France (the “Company”), and is being filed pursuant to Rule 13d-1 under the Securities Exchange Act of 1934, as amended (the “Exchange Act”).  The Company’s principal executive offices are located at 15-55 Boulevard Charles de Gaulle, 92700 Colombes, France.  The Ordinary Shares are represented by American Depositary Shares, each American Depositary Share representing four Ordinary Shares (the “ADSs”).

This Amendment No. 3 amends and restates Item 5 as follows:

Item 5.  Interest in Securities of the Issuer.
The aggregate percentage of ADSs reported as owned by each Reporting Person is based on a total of 131,368,484 Ordinary Shares (equivalent to 32,842,121 ADSs) as reported by the Company in the prospectus filed with the Securities and Exchange Commission ("SEC") on December 8, 2020. Each ADS represents four Ordinary Shares.
Based on calculations made in accordance with Rule 13d-3(d), each Reporting Person may be deemed to beneficially own 1,600,000 ADSs, constituting approximately 4.9% of the outstanding Ordinary Shares.


SIGNATURE
After reasonable inquiry and to the best of my knowledge and belief, the undersigned certifies that the information set forth in this statement is true, complete and correct.
Dated:  January 13, 2021

Sequans Communications (NYSE:SQNS)
Historical Stock Chart
From May 2022 to Jun 2022 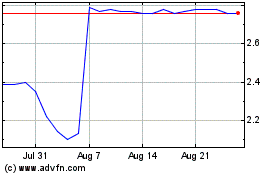 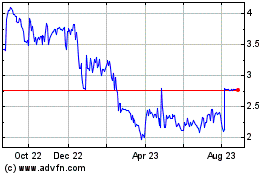 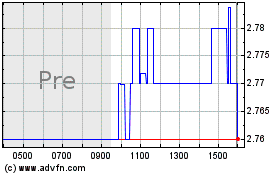