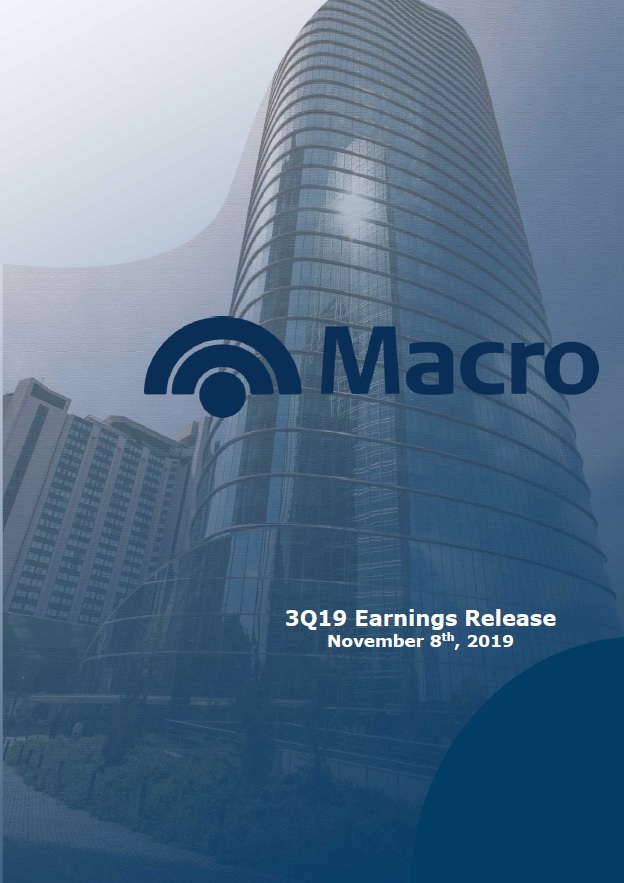 Banco Macro Announces Results for the Third Quarter of 2019

• In 3Q19, Banco Macro’s financing to the private sector grew 10% or Ps.18.1 billion quarter over quarter (“QoQ”) totaling Ps.192.8 billion and increased 15% or Ps.24.5 billion year over year (“YoY”). In the quarter, growth was driven by commercial loans, among which Overdrafts stand out, with a 78% increase QoQ. Meanwhile within consumer loans, credit card loans increased 12% QoQ.

This press release includes forward-looking statements. We have based these forward-looking statements largely on our current beliefs, expectations and projections about future events and financial trends affecting our business. Many important factors could cause our actual results to differ substantially from those anticipated in our forward-looking statements, including, among other things: inflation; changes in interest rates and the cost of deposits; government regulation; adverse legal or regulatory disputes or proceedings; credit and other risks of lending, such as increases in defaults by borrowers; fluctuations and declines in the value of Argentine public debt; competition in banking and financial services; deterioration in regional and national business and economic conditions in Argentina; and fluctuations in the exchange rate of the peso.

This report is a summary analysis of Banco Macro's financial condition and results of operations as of and for the period indicated. For a correct interpretation, this report must be read in conjunction with all other material periodically filed with the Comisión Nacional de Valores (www.cnv.gob.ar), the Securities and Exchange Commission (www.sec.gov), Bolsas y mercados Argentinos (www.byma.com.ar) and the New York Stock Exchange (www.nyse.com). In addition, the Central Bank (www.bcra.gov.ar) may publish information related to Banco Macro as of a date subsequent to the last date for which the Bank has published information.

This Earnings Release has been prepared in accordance with the accounting framework established by the Central Bank of Argentina (“BCRA”), based on International Financial Reporting Standards (“I.F.R.S.”) and the resolutions adopted by the International Accouting Standards Board (“I.A.S.B”) and by the Federación Argentina de Consejos Profesionales de Ciencias Económicas (“F.A.C.P.E.”) with the exception of (i) Expected losses of IFRS 9 “Financial Instruments” and (ii) IAS 29 “Financial Reporting in Hyperinflationary Economies” both temporarily excluded by the Central Bank of Argentina from the applicable accounting framework for Financial Institutions. Data and figures shown in this Earnings Release may differ from the ones shown in the 20-F annual report which shows the impact of the application of I.F.R.S 9 and IAS 29.

It is important to emphasize that this result was obtained with a leverage of 5.3x assets to equity ratio.

In 3Q19 Differences foreign currency totaled a Ps.1.5 billion gain, due to the 36% argentine peso depreciation against the US dollar and the Bank’s long spot dollar position during the quarter and FX trading results (Ps.1.2 billion). It should be noted that if income from investment in derivative financing instruments is added then differences in quoted prices of gold and foreign currency in 3Q19 resulted in a Ps.2.2 billion gain.

In the quarter, fee income totaled Ps.4.1 billion, 13% or Ps.470 million higher than in 2Q19. Fees charged on deposit accounts and credit card fees stand out; with a 10% and 21% increase respectively QoQ. On a yearly basis, fee income increased 37% or Ps.1.1 billion.

In 3Q19 Net Income from financial assets and liabilities at fair value through profit or loss totaled Ps.659 million, increasing 395% or Ps.526 million compared to 2Q19. Profit from investment in derivative financing instruments and profit from sale of financial assets at fair value stand out with a Ps.747 million and Ps.199 million increase respectively. Income from government securities decreased Ps.367 million in 3Q19.

As of 3Q19, the accumulated efficiency ratio reached 32.5%, improving from the 33.5% posted in 2Q19 and improving from the 37.6% posted in 3Q18. In 3Q19 expenses (employee benefits + G&A expenses + depreciation and impairment of assets) increased 2%, while income (net interest income + net fee income + differences in quoted prices of gold and foreign currency + other operating income + net income from financial assets at fair value through profit or loss – (Turnover Tax + Insurance on deposits)) increased 26% compared to 2Q19.

In 3Q19, Other Operating Expenses totaled Ps.6.6 billion, increasing 68% or Ps.2.7 billion QoQ. Turnover Tax and Others stand out with a 16% (Ps.284 million) increase and a 125% (Ps.2.1 billion) increase respectively QoQ. The increase in Others is related to losses in the amount of Ps.2.6 billion due to the reprofiling of short term debt (Lecaps, Lelinks, Letes, Lecer notes) announced by the Government of Argentina on August 29, 2019 and higher credit card charges and taxes. On a yearly basis Other Operating Expenses increased 146% or Ps. 3.9 billion.

In 3Q19 Banco Macro's income tax resulted in a Ps.1.3 billion gain. During this quarter and in accordance with applicable Income Tax Law and regulations and the evolution of Consumer Price Index the Bank decided to adjust income tax by inflation.

The volume of “core” financing to the private sector (including loans, financial trust and leasing portfolio) totaled Ps.192.8 billion, increasing 10% or Ps.18.1 billion QoQ and 15% or Ps.24.5 billion YoY.

Within commercial loans, growth was driven by Overdrafts; with a 78% or Ps.12.3 billion increase QoQ.

The main growth in consumer lending was driven by credit card loans which grew 12% or Ps.3.4 million QoQ.

As of 3Q19, Banco Macro´s market share over private sector loans was 7.7%.

In 3Q19, the Bank’s public sector assets (excluding LELIQs) to total assets ratio was 4.9%, higher than the 2.9% registered in the previous quarter, and higher than the 3.4% posted in 3Q18.

In 3Q19, a 36% or Ps.30.5 billion decrease in LELIQs securities position stands out. Banco Macro’s strategy during the quarter was to allocate excess liquidity in loans and other financial instruments.

In 3Q19 Other government securities increased 82% or Ps.8.7 billion.

The decrease in private sector deposits was led by time deposits, which decreased 19% or Ps.28.4 billion, while demand deposits increased 4% or Ps.4.4 billion QoQ.

In line with Banco Macro’s strategy of reducing Leliq exposure during the quarter, the Bank proactively decided to reduce its peso deposit base.

As of 3Q19, Banco Macro´s market share over private sector deposits was 6.5%.

Banco Macro’s transactional deposits represent approximately 47% of its total deposit base as of 3Q19. These accounts are low cost and are not sensitive to interest rate increases.

Other sources of funds

In 3Q19, the total amount of other sources of funds decreased 24% or Ps.21.1 billion compared to 2Q19. In 3Q19 Shareholder’s Equity increased 22% or Ps.13.6 billion due to the positive result registered in the quarter. Subordinated corporate bonds increased 38% or Ps.6.5 billion QoQ as a consequence of the argentine peso devaluation against the US dollar registered during the quarter.

In 3Q19, LELIQs own portfolio decreased 36% or Ps.30.5 billion, in line with the strategy adopted by the Bank to reduce its exposure to Central Bank Notes.

The Bank’s aim is to make the best use of this excess capital.

The Bank is committed to continue working in this area to maintain excellent asset quality standards.