(1)           David Moradi, 44, a director since 2019, was appointed Interim Chief Executive Officer and Chief Strategy Officer. Mr. Moradi will continue to serve as a director. Mr. Moradi is an entrepreneur and an investor and advisor to technology companies. In September 2018, Mr. Moradi founded and became Chief Executive Officer of Sero Capital LLC, a private investment firm that focuses on growth opportunities in the technology sector. Mr. Moradi also co-founded and is Executive Chairman of First Contact Entertainment Inc., a virtual reality video game development studio. Prior to founding Sero Capital, Mr. Moradi was Founder and CEO of Anthion Management, a technology-focused fund which grew over $1B in assets under management. In 2013, Anthion was converted to a family office investing in various asset classes including early stage technology companies, public equities, corporate debt and real estate. Prior to Anthion, Mr. Moradi was a Portfolio Manager at Pequot Capital Management and an analyst and Portfolio Manager for Soros Fund Management. Mr. Moradi started his career as a special situations analyst for Imperial Capital LLC in 2000. Mr. Moradi holds a B. A. in psychology from the University of California, Los Angeles. He is also Founder and Chairman of the David Moradi Foundation, a charitable foundation supporting education and veterans. A description of Mr. Moradi’s employment agreement with the Company and the performance share awards grant to him in connection with becoming the Company’s Interim Chief Executive Officer and Chief Strategy Officer is included below.

(2)           Dominic Varacalli, 32, was appointed President. From June 2020, Mr. Varacalli was Chief Technology Officer of the Company. From June 2019 to May 2020, he was Founding Partner of Kickstand LLC, a software agency in Portland, Oregon. From August 2015 until May 2019, he was Director of Engineering at The Kroger Co. in Cincinnati, Ohio where he managed teams of software engineers. The Company and Mr. Varacalli are in the process of negotiating a compensation arrangement.

Any PSAs that have not vested on or prior to August 20, 2025 will be forfeited. Mr. Moradi must be serving as the Company’s Interim Chief Executive Officer or its Chief Strategy Officer as of the date the applicable performance condition is achieved for the related PSAs to vest. Any unvested PSAs will become fully vested if, on or prior to August 20, 2025, Mr. Moradi’s employment is terminated by the Company without cause.

The Employment Agreement also provides that the Company will pay Mr. Moradi a gross-up payment for any excise tax imposed under Section 4999 of the Internal Revenue Code of 1986, as amended (the “Code”) and any interest or penalties with respect to such excise tax, plus the amount necessary to put Mr. Moradi in the same after-tax position that he would have been in if he had not incurred any tax liability under Section 4999 of the Code, in the event that any payments, rights, benefits, distributions, or entitlements provided or to be provided by the Company or any of its affiliates to Mr. Moradi or for his benefit pursuant to the terms of the Employment Agreement, the PSA agreement or otherwise would constitute parachute payments within the meaning of Section 280G of the Code.

Item 5.03 Amendments to Articles of Incorporation or Bylaws; Change in Fiscal Year

On August 13, 2020, the Board of Directors of the Company amended the ByLaws to change Section 1 of Article IV. That section indicated that the officers of the Company must include a Treasurer. That reference was changed to Chief Financial Officer.

Pursuant to the requirements of the Securities Exchange Act of 1934, the registrant has duly caused this to be signed on its behalf by the undersigned hereunto duly authorized. 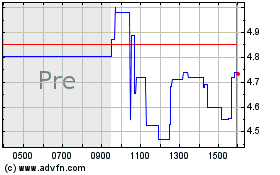