Reference is made to that certain exclusive license agreement, entered into on November 30, 2020 (the “License Agreement”), between Anixa Biosciences, Inc. (the “Company”) and The Cleveland Clinic Foundation, a nonprofit Ohio corporation (“CCF”), pursuant to which the Company was granted (i) an exclusive worldwide license to certain patents and patent applications (the “Licensed Patents”) pertaining to the use of vaccines for the therapeutic treatment or prevention of ovarian cancer and other types of cancers which express the anti-mullerian hormone receptor 2 protein, including an anti-mullerian hormone receptor 2 protein containing an extracellular domain (the “Fields”) and (ii) a non-exclusive worldwide license to use certain know-how related to the Licensed Patents that was not previously known by the Company to make, have made, use, offer to sell, sell and import Licensed Products (as defined in the License Agreement) in the Fields.

On January 26, 2021, the Company entered into a joint development and option agreement (the “Agreement”) with CCF pursuant to which the parties agreed on the terms and conditions under which the parties will collaborate in efforts to develop vaccines for the prevention or treatment of ovarian cancer and other cancers in the Fields. In consideration of its Agreement, the Company will pay CCF a non-refundable, option fee. The Company will also provide development funding in two tranches, the first payment will be paid within fifteen calendar days of the effective date of the Agreement and the second payment will be paid on January 31, 2022. All costs, fees and/or expenses incurred in connection with the Agreement will be paid by the party incurring such costs, fees and/or expenses.

The Agreement is effective as of January 26, 2021 and will remain in effect, unless earlier terminated, upon the later of (i) twenty four months after the effective date and (ii) completion by CCF of its activities under the Work Plan (as defined in the Agreement). The Company may terminate the Agreement at any time for any reason by giving written notice to CCF at least sixty (60) days before such termination becomes effective. CCF may terminate the Agreement if circumstances beyond its control preclude continuation of the Project (as defined in the Agreement) by giving written notice to Company at least thirty (30) days before such termination becomes effective. Under certain circumstances, upon termination of the Agreement by the Company, CCF will be reimbursed by the Company for all costs and non-cancelable commitments incurred by CCF in the performance of the Project for which Company has committed to fund.

The Company has agreed to indemnify CCF in connection with the Agreement and has also agreed to maintain certain insurance. 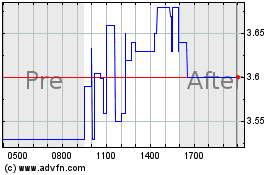