4.05
0.040 (1.00%)
Real-Time
Market Open
4.05
Like Ethereum, but Better: Polkadot Could Be the Secure Future of the Blockchain
October 25 2021 - 06:00AM
NEWSBTC
Polkadot has attracted significant attention since the project’s inception in 2016 is due to its founding team. Polkadot is the brainchild of Dr. Gavin Wood, who is one of the original co-founders of Ethereum and who came up with the idea of the Solidity programming language. Wood left his position as CTO at Ethereum in 2016, shortly after the platform launched on mainnet. He’d already shared a vision for how Ethereum’s development could pan out, but it seems his co-founders disagreed. So Wood decided to implement his vision as Polkadot, a new project. Features of Polkadot Polkadot has several features designed to make it stand out from competitor platforms. One of the most notable is that Polkadot has a kind of sibling network called Kusama, which runs on the same codebase. Kusama serves as a midpoint between Polkadot’s testnets and a full Polkadot implementation. Along with the ability to experiment, Kusama is expected to remain operational as a live environment for lower value applications that don’t require Polkadot’s enterprise-grade security and stability. However, the two platforms are comparable in architecture and operation. Architecturally, Polkadot draws comparisons with Ethereum 2.0. Both platforms use sharding as a way of increasing processing capacity, each deploying a central chain responsible for maintaining the state and security of the overall blockchain. Polkadot’s central chain is called the Relay Chain, whereas Ethereum has the Beacon chain. In both cases, sharded chains connect to the central chain. Polkadot calls these sharded chains parachains. Perhaps the biggest difference between Polkadot and Ethereum is that Polkadot is aiming for full interoperability across other blockchain platforms. Some of the parachains connected to Polkadot will operate as so-called bridge parachains, allowing anyone to transact value from an external network into the Polkadot ecosystem and vice versa. Bridge parachains act as witnesses for bridge traffic to ensure that transaction integrity is secured on both sides. Despite the fact that Gavin Wood was one of the orchestrators of Solidity, Polkadot has shunned Solidity in favor of the Substrate Framework. Rather than coding smart contracts from scratch, Substrate is an open-source framework allowing anyone to create an application-specific blockchain to run on Polkadot or Kusama. Any developer with knowledge of generic programming languages can start using Substrate without learning any new tools. The DOT token and secure custody Polkadot has some intriguing economic forces at play around the native DOT token. Like all other platforms, DOT plays a critical role in network consensus and governance. Polkadot runs on a variation of Proof of Stake called Nominated Proof of Stake or NPoS. It’s similar to the Delegated Proof of Stake used by EOS, in that DOT token holders can nominate a validator by delegating their tokens. However, unlike EOS, a validator can opt to finance their own stake, too—it’s not a requirement to be nominated. Furthermore, while EOS has only 21 validators, Polkadot currently supports close to 300, so it’s far more decentralized. Polkadot operates another layer of tokenomics around its parachains. Parachains can only connect to the Polkadot network by winning one of a limited number of parachains slots, which are awarded to the highest bidder at parachain auctions. The winning bid receives a lease for a fixed number of months. Projects bidding for parachain slots can conduct crowd loans, asking supporters to pledge their DOT for the duration of the parachain lease. In return, projects offer their own tokens as rewards. This process creates an additional dynamic to the DOT economics, as holders have the choice to either delegate tokens to secure the network for rewards or loan them to projects in return for project token rewards. Given the complex characteristics of the Polkadot blockchain protocol, it understandably requires a custodian capable of full warm and cold storage solutions. Digivault, the EQONEX Group’s crypto custodian, was the obvious choice to provide secure custody services for DOT. Digivault is the first custodian registered by the UK’s Financial Conduct Authority (FCA). DOT is listed on EQONEX Because of its utility, degree of decentralization, and innovation, you can trade the DOT token on EQONEX. What’s more, all customers of EQONEX who hold DOT will custody their holdings in Digivault by default.
EOS (COIN:EOSUSD)
Historical Stock Chart
From Nov 2021 to Nov 2021 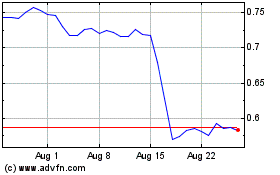 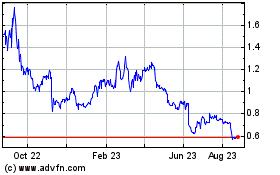 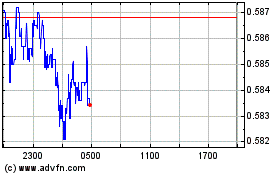